Last week, on Oct. 4, President Biddy Martin emailed the college community with an update on the college’s Anti-Racism Action Plan. The email outlined progress and developments within the sectors of the plan, which generally center around changing the makeup of Amherst College staff and faculty, changing curriculum, practices and rules at the college, and studying and documenting the legacy of race and racism at the college. The anti-racism plan was launched and developed in response to student demands for a more racially equitable campus made in campaigns like #IntegrateAmherst and Reclaim Amherst. Students have found that these anti-racism updates demonstrate that the college has achieved some limited concrete change but mostly hinges on insufficient committee work and shallow promises.

In August 2020, Martin released the Anti-Racism Action Plan, writing that “this summer has been another object lesson in how racism, particularly anti-Black racism, is woven into the fabric of the country” and that at Amherst, “the entire community needs to dig deeper to understand and uproot the underlying structural causes of the inequities that Black alumni and current students continue to experience.” The plan was laid out into several sections, which last week’s email provided updates on.

A primary area in which the college has been called on to improve is the racial homogeneity of its tenure-track faculty and senior staff. The email noted that during the 2020-2021 school year, 12 tenure-track faculty were hired, eight of whom are faculty of color and five of whom are African-American scholar-teachers. This brings the total tenure-track hires to 62 in the past five years. Of those 62 professors, 47 percent have been faculty of color while half have been women.

Grace Cho ’23E recognized the diversification of the faculty as a step in the right direction. “…Of all the information and updates [Biddy] presented in the email, the most concrete/tangible accomplishment has been increased hiring of faculty of color and more faculty who are women,” she wrote in an email interview.

Along with faculty, the college noted updates to its work surrounding increased diversity on staff, especially as it searches for a new Chief Human Resources Officer, a position formerly held by Maria-Judith Rodriguez and which is filled in the interim by Christopher Casey. The email noted a “a remote work pilot project for AY [Academic Year] 21-22” intending to attract a more diverse set of candidates for all positions it’s currently hiring.

Coupled with the elevated focus on faculty and staff diversity, the email noted that the process of hiring a Chief Equity and Inclusion Officer was ongoing. The current nonexistence of the position has been noticed by students.

Maya Foster ’23, a member of the Presidential Task Force on Diversity & Inclusion, said that without a permanent Chief Equity and Inclusion Officer, getting concrete work done has been a challenge.

“It is very difficult for me to trust a lot of the stuff that’s going on right now when we actively don’t have a Chief Equity and Inclusion Officer … It’s really difficult for me to feel like things are getting done when they’re not being spearheaded by a singular leading team,” said Foster.

The college is also doing more to recognize and document its own fraught past. The Racial History of Amherst College Steering Committee established a webpage to document the college’s racial history. The email made specific mention of the senior thesis of Anna Smith ’22 who has been investigating Israel Trask, one of the college’s first trustees who held hundreds of slaves. The email referred to Smith’s work as “the most thorough account of Trask and his ties to the College to date.” (Smith is a managing design editor for The Student.)

In tandem with the college’s ongoing documentation of racial history, it made sure to promote the talk by genealogist Nicka Smith — a descendant of Trask’s slaves — who has dedicated her research to telling the stories of those enslaved by Trask. The talk took place at 5:30 p.m. on Monday, Oct. 4, just one minute after Martin’s email was sent.

The college also elaborated on efforts to reimagine its policing structures, in response to demands from Reclaim Amherst to defund and abolish the Amherst College Police Department (ACPD). The email provided various committees and ongoing research that aim to gather input from students and consultants that intend to inform how ACPD can be restructured. Such committees include the Campus Safety Advisory Committee, which is open to any Amherst community member who wants to provide their ideas on the matter. This committee will present various models for campus policing to Martin and other senior administrators at the end of the fall semester.

Foster, who also serves on the Campus Safety Advisory Committee, explained that sometimes the work feels insufficient, given that the decision will ultimately be up to the trustees. “We’re doing restorative circles and polling people and getting their input, but a lot of it feels like we’re working for nothing, because the Board of Trustees ultimately gets to make that decision and we know that they’re a super conservative group of people and their views on policing historically have not been particularly radical.”

Foster noted that her frustration around committee work is not limited to the Campus Safety Advisory Committee. Martin’s email, to Foster, felt oddly timed given that much of the progress she has seen on the committees she serves on has stalled. “To send out this email specifically at this time when, for example, the Committee on Diversity, Equity and Inclusion, which got changed from a task force, hasn’t met all year. We didn’t meet all summer, and we haven’t met all year. I don’t know why. That’s been really kind of tough,” Foster said.

Cho echoed this sentiment around the inefficiency of committees: “I think the email just reflects the administration’s tendency to turn towards committees that are meant to tackle these issues but really end up prolonging progress towards effective solutions and changes within the college.”

Even though the email left students wanting more, Foster concluded,  “I am very glad that [anti-racism work] seems to still be on Biddy’s radar, and that the emails are getting sent out, because I think that reminds the student body that we should be holding them accountable. We’ve lost a lot of that fire, but I think we will get it back at some point.”

On Oct. 6, the Council of Amherst College Student-Athletes of Color (CACSAC) held the CACSAC Walk Out of Practice Protest. The administration quickly responded to CACSAC's demands, most notably taking steps to ease "pay to play" barriers in the athletics department.

On Oct. 11, the Association of Amherst Students (AAS) Senate issued a response to a series of hateful emails sent to Black student groups at UMass Amherst. The message criticized the college for its insufficient response to the incident. 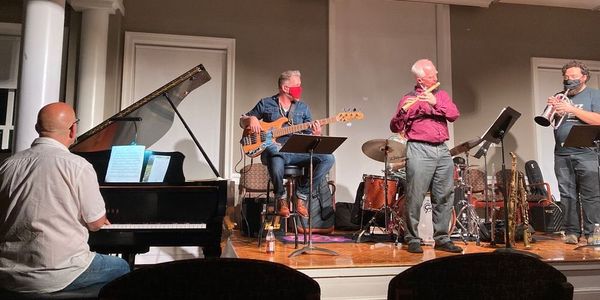 Jazz is back in town! This week, staff writer Milo Leahy-Miller ‘24 discusses the return of [email protected] The jazz group kicked off its 2021-2022 season with a stellar performance on October 7th and looks forward to a year full of the best in blues.